Company offers ‘single best gift someone will ever buy’ 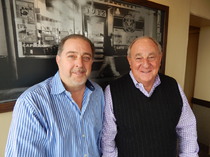 During the season of gift giving, it is often a challenge to find that perfect gift for someone you love. But Dan Gelfond of Riverwoods and his business partner, Ron Bliwas of Highland Park are offering what they describe as “the single best gift someone will ever buy in their lives.”

The two are the founders of Personal History Interviews, their newly launched personal interviewing company that works with individuals to produce a DVD of their self-told life story.

“A legacy to me shouldn’t just be about leaving money behind,” said Gelfond, who is the owner of his 16-year-old Riverwoods based video production company, Keepsake Family Tree Video. “A legacy should be about leaving behind your story, your values and who you are.”

“It’s priceless. You have this record forever. I would have given anything to have had a video of my grandparents telling their story, including how they came here, met and fell in love. That’s gone forever,” said Bliwas, who is the chairman of the Chicago-based advertising agency, A. Eicoff & Company, where he has worked for four decades.

Personal History Interviews begins with a short pre-interview followed by a two hour on-camera interview that usually takes place in the interviewee’s home.

“Both Dan and I are trained interviewers, so we each have the ability to ask questions in a way that will bring out who they really are,” said Bliwas, who in 2007 was inducted into the Direct Marketing Association’s Hall of Fame.

“There are lights and microphones and one of us is talking them through the whole process,” Gelfond said. “Most people love it. It’s their 15 minutes of fame.”

The finished product is an edited DVD that includes the insertion of childhood, family, wedding, and other milestone photos provided by the client.

“Someone can be watching it and learning so much about their parents,” Gelfond said. “It all comes through and you are hearing it from the original source, in their voice, their accent and through their personality.”

The inspiration to start the company came from a past experience of both Gelfond and Bliwas, who were coincidentally both interviewers in the 1990’s for Steven Spielberg’s USC Shoah Foundation. Each interviewed several Holocaust survivors whose stories are displayed in museums all over the world.

Several years ago, Gelfond began offering the interview service to his clients and Bliwas asked his friends in Young Presidents Organization if they were interested. One of those friends happened to be Larry Levy, co-Founder of Levy Restaurants, who took him up on it for his mom, the late Eadie Levy.

“My mom was very special, very nice and very humble,” said Levy of Eadie, who died at the age of 92 in 2012, four years after the interview. “She was a terrific mother who took us to sports and she became an assertive, strong leader and influencer. In her interview she talks about all of her siblings, about being a stay-at-home mom, and the last half of her life as a career person.”

Levy said through his mom’s interview he learned a lot about her life and also enjoyed her funny stories.

“She knew exactly what the purpose was of the video, that it was for everyone to remember her,” he said. “That was important to her.”

“I am passionate about this,” said Bliwas. “I love hearing people’s stories and preserving them. Once someone is gone, their stories don’t have to go with them.”