Ron Bliwas, The head of the ad agency behind ‘…or your money back’ has a new hook 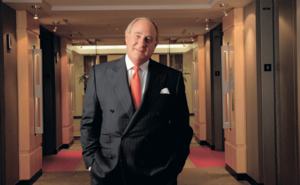 Before Ron Bliwas stepped down in 2013 as CEO of Chicago ad firm A. Eicoff, he thought he would pursue videography as a hobby. He told friends he could record their parents talking about their lives.

Restaurateur Larry Levy took him up on the offer, and in 2005 Bliwas interviewed his mom, Edie Levy, whose recipes were mainstays of the Levy restaurant empire.The matriarch died in 2013, and a year after her death, her son called Bliwas to thank him for keeping her memory alive.

“And I thought, ‘There’s a business here,’ ” Bliwas recalls.

He’s now teamed up with videographer Dan Gelfond, and together they run Personal History Interviews.
The Riverwoods-based company is still in its infancy. It has done a few dozen interviews at a cost of $2,500 apiece. Ron Bliwas isn’t dissuaded by the slow pace in getting Personal History Interviews up and running. “I just love doing it,” he says.

He and Gelfond have just a few competitors in the area, including WGN-TV/Channel 9 news anchor Robert Jordan, who does family documentaries through his Lincolnwood-based Jordan & Jordan Communications, and Susan Saunders, who runs Family Line Video in Chicago.

Bliwas juggles his latest career with his role as chairman of Eicoff, a direct-response TV ad agency that came up with the phrase “. . . or your money back.” Direct-response ads urge viewers to “call now!” or go to a website to get a product while it lasts. They were the genesis for the modern-day infomercial.

Bliwas, 72, was raised near Pittsburgh and attended the University of Arizona, where he played baseball. After earning a degree in advertising, he landed in Chicago at Eicoff in 1970. A decade later, he was named CEO. When the company was acquired by Ogilvy & Mather in 1982, he stayed at the helm. “It was a marriage made in heaven,” he says. “I thought David Ogilvy was the greatest man in advertising.”

After 30-plus years, though, “I had accomplished everything I wanted to accomplish,” he says.
Life after the CEO job took some getting used to. In the first few months, he says, he couldn’t figure out his emotions.

“I felt comfortable with my decision, but there was something going on inside of me,” he says. “I wasn’t scared anymore. When you run a company, you’re scared 24 hours, seven days a week. You’re scared a client will call and fire you. You’re scared someone will walk in and quit. There’s always something. You learn to live with that knot in your stomach.”

Ron Bliwas says he wasn’t ready to stop working outright. He had learned videography in the 1990s when Steven Spielberg, the producer and director of “Schindler’s List,” enlisted him and many others across the country to help record the personal histories of Holocaust survivors for the Shoah Foundation.
“Of all the things I ever did in my life, that was the most important,” he says.

Along with the videography business, Bliwas hopes to publish a novel about an immigrant who dreams of living on Astor Street, only to find life there isn’t necessarily sweet. It would be his second book. The first is a leadership advice book that features his friends as examples, including restaurateurs Levy and Rich Melman, banker Norm Bobins and CDW founder Mike Krasny. “The C Student’s Guide to Success” came about after Bliwas achieved his own success even though he had been a C student.

He is married to his college sweetheart, Linda Bliwas, a clinical social worker. They have two children who live within walking distance of their home in Highland Park.

Ron Bliwas says: “I have five grandchildren and that’s the best part of life. Being a parent, you have to be a disciplinarian.” On the other hand, when his grandchildren see him, they know “they’re going to have a good time.”